I’ve always been interested in strange antennas, having stumbled upon the K0S Strange Antenna Challenge many years ago. Sadly, the original website no longer seems to be around, however there are still references to it online, such as a post from the organiser, Erik Weaver N0EW, on eham: https://www.eham.net/articles/10721. Essentially, it’s a special event station that uses only non-standard items as antennas. The example given was that of a tent pole: if you just stick the tent pole in the air, that’s not really a strange antenna since it’s just a bit of metal. If, however, you put the whole tent up in a tree, that’s a strange antenna.

For quite a long time, I’ve been meaning to try out some unconventional antenna ideas, and this seemed like the perfect chance! It’s more than just a joke though, it’s also a good opportunity to learn something about antennas.

## Early Experiments I decided to start small, so I first conducted a small experiment with a pot of custard. I actually bought two: one to taste and the other to shove some wires in and try to tune. Good job as well – one of them turned out to be green and furry when I opened it, so I ended up eating one spoonful of the correctly coloured one, before proceeding to tune it. 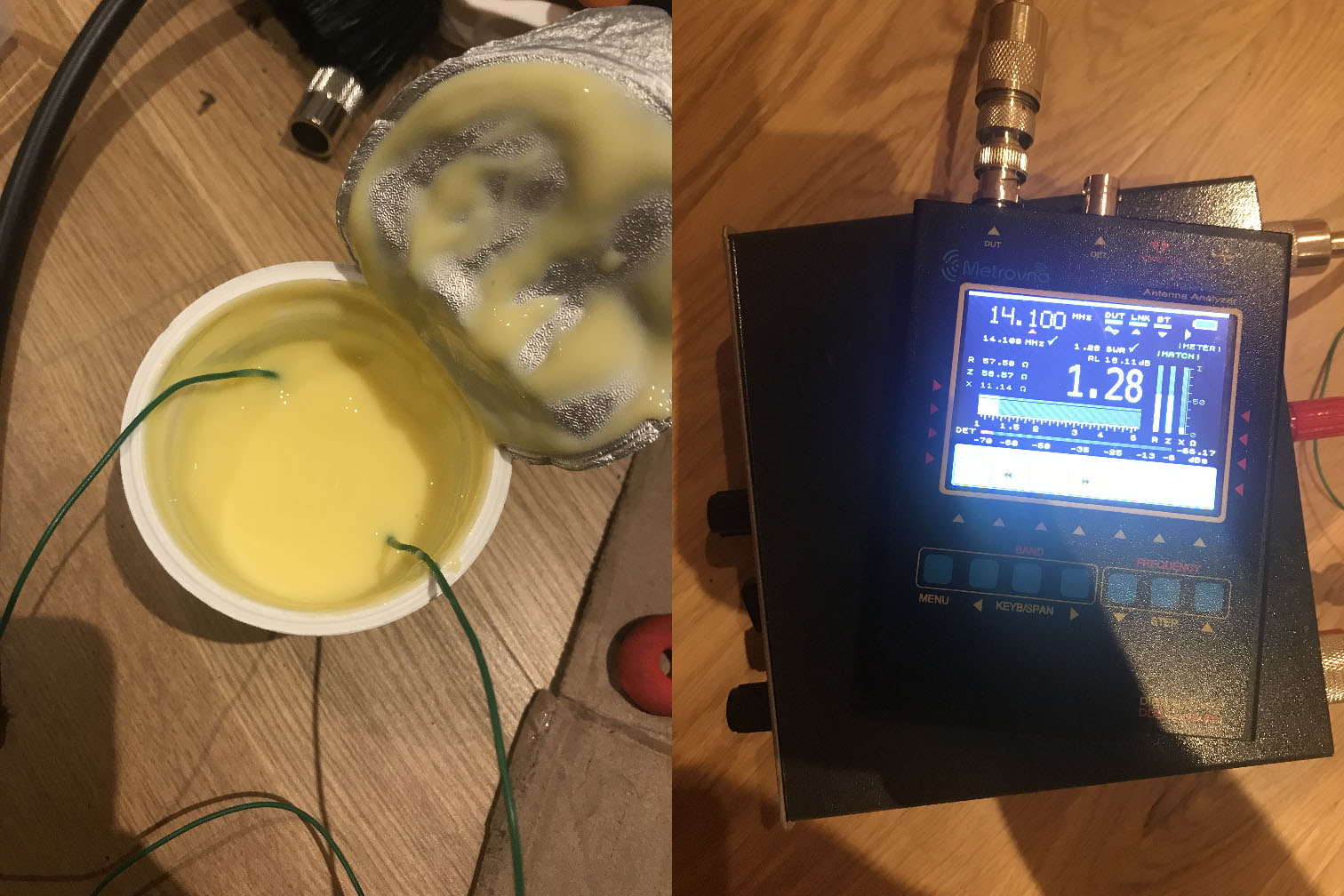 It worked! I managed to tune a pot of custard to the 20m band.

I decided that to satisfy the spirit of “tuning a bowl of custard” I needed a literal bowl of custard. I also wanted a relatively large amount of custard to give it the best chance of doing something interesting. I went to the local supermarket and bought a 4 litre bowl and a few 1kg boxes of custard.

This sat around for a couple of weeks, generally getting in the way until I finally got around to trying to tune a bowl of custard. The other problem was I couldn’t quite believe how daft the thing I was about to do was.

Anyway, one Saturday evening, I finally got chance to fill a bowl with custard and have a go. In the end I managed to get three boxes of custard into the bowl (I’d actually bought more, so I have some spare – more on that later) and tuned it up on 20m (14.15MHz to be specific – though it was flat across the band). Just out of interest, I hooked up my Yaesu FT-817ND and tried to receive some FT8. In case you haven’t come across it, FT8 is a digital mode designed for very weak signal reception. Some people hate it, but I really like how well it demonstrates band conditions, including how they change very quickly. Anyway, I figured if it was going to work on anything, it was FT8. To my surprise, after enabling the receiver’s preamp and turning up the RF gain, I was able to receive a signal from Greece – at one point the signal was -6dB which for FT8 is very much a decent signal! It’s worth mentioning here that on receive the ATU really doesn’t do much. But nonetheless, I was receiving FT8 on a bowl of custard! I did swap the custard out for a dummy load, but unsurprisingly, it did not receive anything – so at least on receive, the custard was not a complete dummy load. I do wonder if some of the pickup was on the wire feeding it, but the custard was definitely doing something.

In any case, the question was not if you could use custard to receive, but rather if it was possible to tune a bowl of custard to an acceptable SWR.

I did attempt to put about 30-40W of RF into the antenna system (bowl of custard + ATU) however nothing was picked up on PSKReporter, leading me to conclude that the bowl of custard was significantly inferior on transmit compared to receive. This came as absolutely no surprise of course, but I had to try.

There are a couple of things I’d like to try next. The first is to repeat the experiment with a bowl of jelly, to see if it behaves any differently.

The second experiment I would like to try, and the subject of the rest of this post, is to make a custard antenna that can at least vaguely usefully be used as an antenna. I want to make a contact of some form on an antenna made of custard!

My initial idea was to take some plastic guttering and make a custard dipole. The problem here though is supporting the guttering far enough above the ground for it to be usable as an antenna. My next thought was to use rigid plastic pipe, filled with custard, however I’m a little concerned that once filled with custard, the pipe could become too heavy to sensibly hold up. Since the length is probably more important than the diameter, I came up with the idea of using clear plastic tube – partly because it would look cooler if you could see the custard. Since custard is quite a thick material, I suspect I would need to use, maybe 15-16mm inside diameter tube to be reasonably sure of being able to fill it – and clear tube would be an advantage here since you would be able to see any air bubbles and squeeze them out.

I think aiming for an antenna resonant on the 20m band is perhaps the best bet. I could maybe make something for VHF but that’s not as fun, and based on a very quick test I did, custard might actually be lossier above 30MHz or so. Higher HF bands aren’t really very usable at this low point in the solar cycle, and I think 5m or so of custard is probably just about achievable.

There are a few questions remaining about this:

The answers to these questions (which no one has ever asked) will come in a future post.

These were migrated over from Wordpress